I have a concept for a "fuelless flight" spinning airship .

I have patterened this latest design after a pinecone.  (In fact, I superimpsed my latest drawing on top of a pinecone photo!)  As you can see, I've been thinking about this spinning balloon concept for a few years now.  It is only recently that it has dawned on me to use the pinecone as the template to follow for the spiral pitch of the balloon's propulsion vanes.

This system becomes "Fuelless" by taking advantage of the Bernoulli principle, and the laws governing buoyancy.

With a water-cooler sized LN2 maker, these two principles can now go hand-in-hand, which could lead to an entire fleet of these spinning airships, with detachable gliders.  The predictable air current patterns could be followed across the nation, to create a network of fuelless flight, spinning airship "skycrane" lift stations!

Payment is given in liquid air.  The spinning balloon's only purpose could be to take these gliders up to a 5 mile altitude, and then release them!

The hydrogen lifting gas is then re-compressed, and the now heavier-than-air airship descends back to the ground, to once again to carry another glider back up to 5 miles altitude.

The spinning-effect of the airship is also a kinetic energy electricity storage system, for an on-board battery that runs the compressor and gondola, etc.

1) It spins like a football,  as it 'corkscrews' through the air, utilizing a type of compressed air propulsion, supplied by the expanding liquid air.

2) It has an important "byproduct" of air motor cold exhaust, that creates the cold air slipstream which exits out over the tapering balloon shape.  This allows it to travel much faster, and be more stable in high winds.
3) The balloon is filled with hydrogen instead of helium.  This autonomous floating method decentralizes the govt.-controlled helium lifting gas necessity.   An h2n2 dual balloon envelope could be utilized when transporting people.  The inner balloon contains the hydrogen, and the outer balloon contains the inert, non-flammable 'blanket gas' of either nitrogen or helium.

4) It runs on liquid air (-321F)
5) -which is made by the descending gliders, which can computer-glide on airstream currents for 100's of miles.  It is their "payment" for getting transported back up to a 5 mile altitude.
6) With a unique stationary spiral-bladed rudder, that can be warped into any direction to steer the airship
7) The graphite bow, which the gondola rolls forward and aft upon, is analagous to a "reverse suspension bridge".   It is able to hold the central cable taut, and also allow the moveable gondola to be a ballast for pointing the airship skyward, or towards the ground.

I have been inspired by Viktor Schauberger's invention of a slipstream biological-submarine, and then translated it over into this spinning airship concept.  It also mimics, to some degree, how bacteria swim.

^ Patterned after the pinecone, this airship becomes highly maneuverable, and fast. This is due to the slipstream effect of the colder, denser air exhaust that hugs the tapering balloon envelope. Steering happens in two ways. The gondola acts as ballast, by moving forward and aft upon the graphite bow, to point the airship upward or downward. The kinetic energy of the balloon rotation works with a radio-controlled, magnetic clutch, which engages to warp the tail fin into any desired direction.

The moveable gondola that also is able to grasp and hold.  Whether it is the LN2-producing glider, or being a 'skycrane', or grasping an upwind anchoring location. ^ 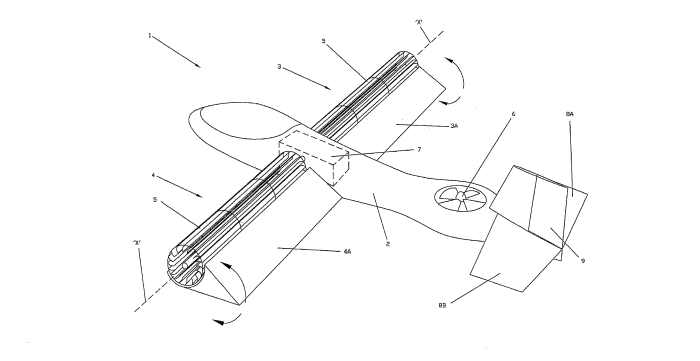 Here is an original drawing idea, to add certain guiding shapes to the inside of the air tank! As far as my patent searches have gone, this has never been done before. Why? Because there hasn't been a need to do so. Now, here comes the valvular/air jet principle.

My contribution is in giving the high-pressure jet of air some place to go to to get out of the way of the low-pressure air that is getting GULPED in!

That is, the high pressure air would be out of the way for a longer interval while it is trapped inside of the scrolling shaped valvular conduits!

The scrolling shape's proportion is in keeping with the shape of the Nautilus seashell, or, as it is called, the Golden Section ratio.

The Airgulper assembly is retrofitted inside of an insulated scuba tank.^  Not only would it be extremely quiet while compressing air this way, the compression heat also remains for a time.   Normally, if someone is compressing air into a tank, they intend to use it in the near future.  So it only makes sense to insulate the tank to conserve energy.

Riding upon a captured whirl!  ^

^ A FUELLESS FLIGHT concept via the laws of BUOYANCY.

Here is the Canadian SOLARSHIP in its present incarnation:

Here is my addition to make it more efficient, much quieter, and have VTOL (Vertical TakeOff & Landing) capabilities.

The noisy underside propellers are replaced by the much more efficient, 'PEEBLES FANWING' on the topside of the swept wing.

"Today's events are bound to disturb yesterday's established order."  My passion for biomimicry designs has been for many years.  When I see an innovative, yet non-sustainable design that interests me, I'll then study it to re-work it into something new and novel, while being based upon how nature sustainably operates.

Here is the 'Fuelless Flight' concept that I believe you will enjoy looking through. First of all, a little background information for my inspiration with this new and novel concept.  I have redesigned a revolutionary Canadian airship/plane that's called 'Solarship'
I have many different concepts that I've done this with, though let me stay focused upon just this fuelless flight idea first.  I feel that it is truly a Biomimicry design, which is based upon the laws of buoyancy, combined with the laws of gravity.  Utilizing these two forces together in the right way will eventually give us a 'family aircraft' that could circumnavigate the globe, needing only the amount of fuel (LN2) that is stored on-board, as a 'catalyst'for making ALL the fuel we need, right out of the atmosphere!
Those two forces working together could lead to a unique way of gliding  hundreds of miles, to then land with more fuel than was started with.Imagine the worldwide newspaper headlines, when this discovery is finally demonstrated with a prototype!
Yes, it is true, that

"all we need is the air that we breathe to love the Earth!"